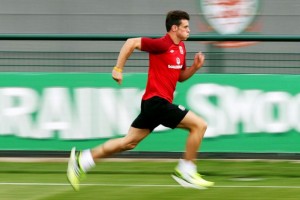 Endurance is one of the key aspects of physical fitness for soccer players. A typical game runs for 90+ minutes. This will involve running, jogging and sprinting multiple times for the duration of the game. Here we will look at how to build the level of endurance you will need for a game:

Research has shown that in a 90-minute game, players spend approximately 40 to 60 minutes running or jogging. This should be considered an absolute minimum in terms of running. Build endurance by running as often as possible. With running, endurance is built by running daily. The number of miles run every week can be added up to approximate how much can be run in a single session. For example, a player who runs one mile every day for a week could run seven miles straight in a single session. Build up to the point where your daily total running time over a week exceeds the 60-minute mark.

Improve endurance and aerobic capacity by doing sprints weekly. Sprinting should be an all-out effort that is done for a very short period of time with lengthy breaks. An example would be to sprint for 15 seconds and then walk for 30 seconds, repeating this for a total of four minutes. This should not be done more than once a week as it can take a toll on your recovery.

Follow these two basic guidelines and there will be a noticeable improvement in endurance within the first few weeks.