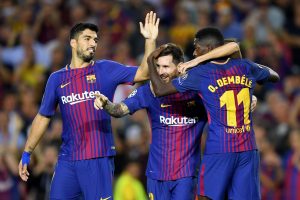 Barcelona has watched in horror as league rival Real Madrid took the Champions League trophy two years in a row. The season didn’t start well for the Blaugrana, with in-fighting, board-level issues, the departure of Neymar, and some massive defeats. However, the Barcelona board did one thing right when they appointed Ernesto Valverde as the new coach. Under his tutelage, the club has regained momentum and is at the top of the standing in the La Liga. With this in mind, we now see several reasons why the team could be a contender to take the European crown this year, here are two of the most important:

Barcelona got a lot of criticism for some of their summer signings. The process looked chaotic, and the club rightly took a lot of flak for how they went about filling up the roster. What a lot of people failed to see was the sheer amount of world-class talent. Nelson Semedo, Paulinho, and Dembélé give Barcelona a lot more firepower where it is badly needed.

A lot of people are now saying that the departure of Neymar was a blessing in disguise. Since the young Brazilians departure, the Barcelona defense has seen the kind of improvements the team has needed for years. The team has only conceded three goals in the league and a single goal in the Champions League so far, making it one of the best defense runs in recent memory.