How Much Padding is Allowed in Soccer? 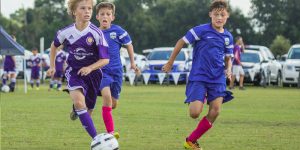 If you’re a parent who is new to the game of soccer, you might be wondering why youth soccer uniforms don’t have padding built in. You have probably seen footage of a soccer game, enough to know there is running and tumbling involved. Is this really a safer alternative to a contact sport like football? Actually, yes. In many respects, soccer allows kids to have fun in a team building exercise without the risk of dangerous injury like those commonly found in football players.

Still, it may come as a shock that kids goalkeeper gloves are some of the only pads on the pitch. Here’s why the guidelines are the way they are.

Soccer is fast, and players need to be agile. If they were weighed down by a lot of padding, they wouldn’t be as fast on their feet. It’s also a game of endurance, and lots of padding would tire them out quickly. That’s why football is played in short bursts.

Cheap soccer jerseys usually have enough room for elbow pads if your league allows them, but not much else. The good news is that most kids leagues don’t use tackling.

Padding that is Allowed

No matter what age, your league almost certainly allows shin guards for use. Shin guards allow for sliding, better falling and tackling when your child is older. Shin guards help you avoid scrapes and cuts getting really bad.

Aside from shin guards, you don’t really need much else to play the game. That’s the beauty of soccer. It’s very inexpensive for new players.