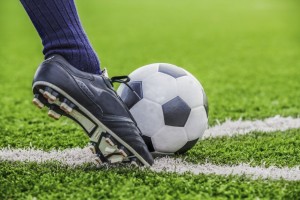 One of the best bits of advice given to young Soccer players who play striker is this: you miss all the shots that you never take. This was a quote by Hockey player Wayne Gretzky. It holds true for Hockey and it holds true for Soccer. Younger players start out with a natural hesitation to shoot. What they don’t realize, and it needs to be made clear is that without shooting and missing they will never learn how to make the decision when to shoot. Once they do get in the habit of shooting, here are a few tips that will help them make better shots:

Always keep an eye on the goalkeeper’s position. A smart striker will always keep a look out for any gap or opening that he can exploit when the right time comes.

There are two primary ways to shoot. The instep with follow through will give you power and the side foot will give you accuracy. The key is to know when to use which shot and to maximize the chances of the shot getting through and getting in.

In the interests of accuracy and stability, keep your foot alongside the ball as you kick. As you do that keep your body positioned over the ball and your head down with your eyes on the ball. In terms of the contact point, look to strike from the middle to the top half of the ball.

A final tip is to maintain your composure as you strike. The calmer and composed you are, the better your choices and the higher the chance of a goal.